2014 - The year of pterosaur bonebeds

This post is part of the Science Borealis Blog Carnival discussing the most important science news in our fields. As a pterosaur palaeontologist, I've chosen to talk about pterosaur bonebeds - enjoy!

Pterosaurs (extinct flying reptiles that lived alongside the dinosaurs) are rare in the fossil record. Most species are known from a few specimens, and rarely found with more than one individual in one place. This is primarily because pterosaur bones are extremely fragile due to the thin-walled hollow nature of the bones caused by the respiratory system and pneumaticity. This is why it is so rare to find them together and why this year has been so important for pterosaur-related news. There was not one, but two pterosaur bonebeds reported in 2014: one in China, and one in Brazil.

What is a bonebed?


The first thing to understand why this is so important in palaeontology is to learn what a bonebed is. A bonebed is a geological deposit with many bones found throughout it. They are important in palaeontology for many reasons. First of all, and probably fairly obviously, they provide us with many specimens to study. Large accumulations of bones can provide us with a lot of information that single skeletons can't. If the bonebed is full of several species, it can be caused by something like quick sand that many different animals can get trapped in. If there is only one species, that can tell us that the animals were living in some kind of group that died in some kind of catastrophic event. For example, ceratopsian (horned dinosaur) bonebeds are common in North America, including Pachyrhinosaurus, Centrosaurus, and Styracosaurus. These have commonly been interpreted as herds of ceratopsians that have been caught in something like a flooded river. In addition to understanding things like social behaviour, it can also help us understand ontogenetic (developmental/age-related) changes and sexual differences. As herds consist of males and females, as well as all ages, these herd-accumulated bonebeds can be very important in understanding the biology of these extinct animals.

As mentioned above, accumulations like this are extremely rare in pterosaurs. Before this year, only one had been found. This was from the Lower Cretaceous of Argentina, at a locality referred to as "Loma del Pterodaustro", named for the hundreds of specimens of the bizarre filter-feeding pterosaur Pterodaustro [1]. This locality provided information for this pterosaur from egg to adult. Unfortunately, the majority of this material is two-dimensionally flattened. Until this year, that was the only major pterosaur accumulation known.

The first pterosaur bonebed of 2014 came out in June describing a new species, Hamipterus tianshanensis [2]. This find was exciting for many reasons: it included specimens of all ages, several 3D preserved eggs, and evidence of sexual dimorphism. It represents an Early Cretaceous (100-120 million years ago) stream or lake deposit potentially formed by a storm, catastrophically killing all the animals at once and preserving them together. About 40 individuals (meaning identifiable individuals, not just bone fragments) have been removed from the locality, but the authors suggest there may be hundreds, making this a massive deposit.

Hamipterus was a pteranodontoid pterosaur with teeth, a bony crest on the pre maxilla (the front part of the rostrum), and a wingspan of about 3.5 m. This crest changes throughout ontogeny (over its lifetime) and appears to be sexually dimorphic. Throughout its ontogeny, the rostrum (snout) and premaxillary crest becoming more robust. Crests and features that have some kind of sexually selective function become more prominent as the animal reaches sexual maturity, which is why these features are generally larger and more robust in older individuals. In Hamipterus, the crest also appears to represent a sexually dimorphic feature, with two different crest morphologies present in similarly sized skulls. Skulls tentatively described as males were larger and thicker with more strongly curved anterior portions, while "female" skulls have shorter crests without an anteriorly curved portion. Several skulls of both morphs were found and sex was tentatively assigned, although more information is needed to confirm these assignments such as difference in pelvis shape or presence of medullary bone. Finally, the other exciting thing about this find is the presence of five eggs, which doubles the total number of pterosaur eggs found in the fossil record. Even more exciting is that these eggs, like the rest of the fossils, are preserved in three dimensions, unlike the previous pterosaur eggs that were flattened. The morphology of the eggs confirms previous studies that have suggested pterosaur eggs were soft-shelled eggs, more similar to some snakes and lizards than modern birds.

The presence of so many individuals and eggs lead the authors to suggest this was a nesting ground and that Hamipterus may have been gregarious, living (or at least nesting) in large flocks, much like some modern birds.

This study was covered significantly in the media including the Guardian, Reuters, and CBC.

After the announcement of Hamipterus, pterosaur specialists and other palaeontologists were very excited. Imagine our excitement when just 2 months later, in August, the massive Caiuajara (pronounced Kai-u-a-har-a, I believe) bonebed from Brazil was described [3]. This bonebed from the Late Cretaceous was found in the southwest part of Brazil, where pterosaur fossils were previously unknown. While Brazil has a lot of wonderfully preserved pterosaurs, they all come from the northeastern region. While the Hamipterus bonebed was from a water-logged area, Caiuajara dobruskii was found in a desert-lake deposit, the first time a pterosaur has been found in this kind of environment. 47 individuals have so far been identified from hundreds of bones, and there may be as many as a few hundred individuals present.
Caiuajara was a tapejarid pterosaur, with a full grown wingspan of approximately 2.4 m, and was characterised by a ventrally deflected (curved down) front portion of the upper jaw, toothless jaws, and another premaxillary crest starting at the front of the rostrum and continuing towards the back of the skull. Tapejarid pterosaurs are known for their toothless jaws, thought to be used to eat fruit, and their large dorsally directed cranial crests. In the Caiuajara bonebed, skulls are present from all sizes, showing the ontogenetic trend in crest growth. It shows that as the animal got larger and reached sexual maturity, the size and shape of the crest changed, much like that seen in Hamipterus, only the crest of Caiuajara is much larger. Furthermore, the entire skeleton is known, even if bones cannot be attributed to specific individuals. 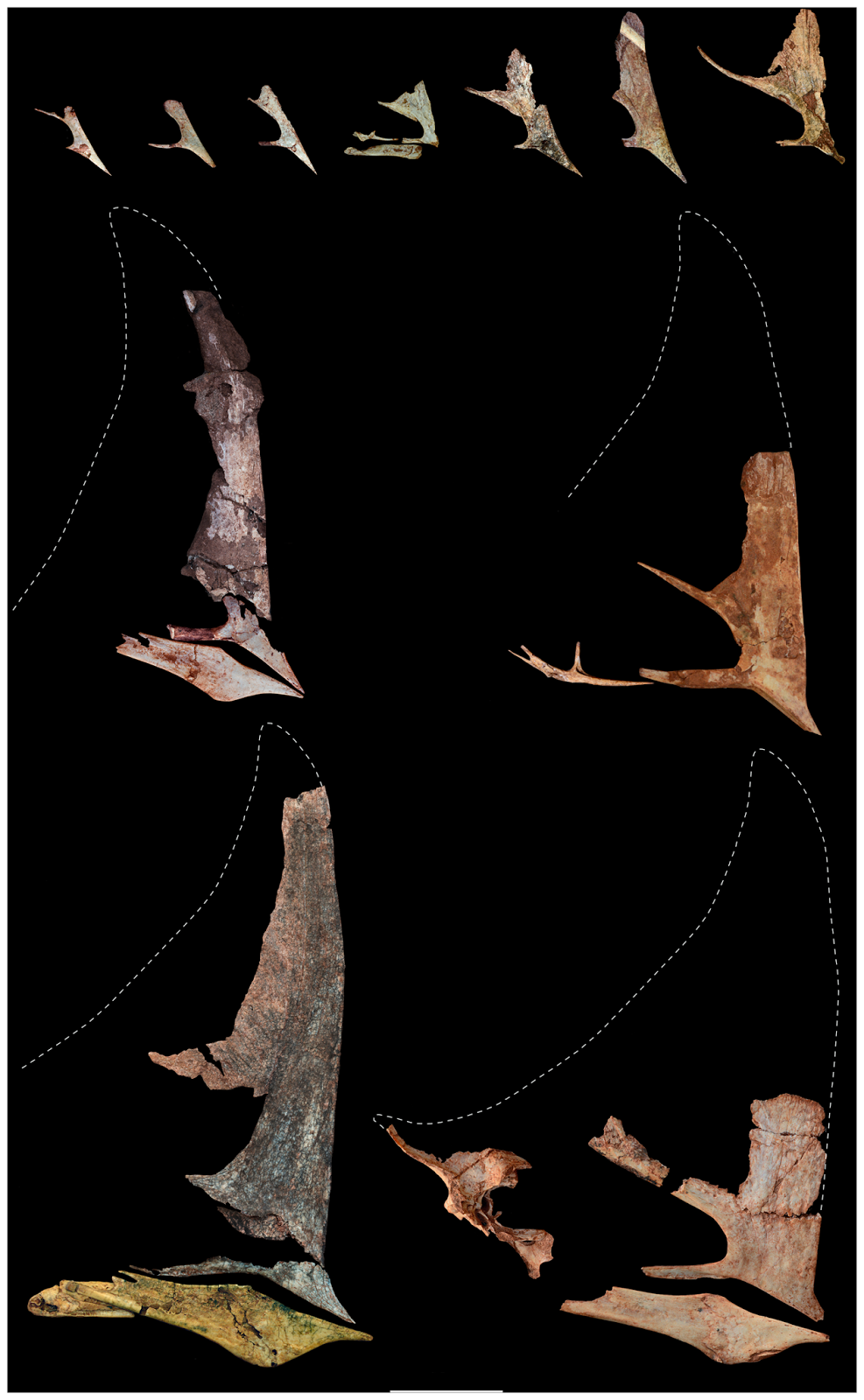 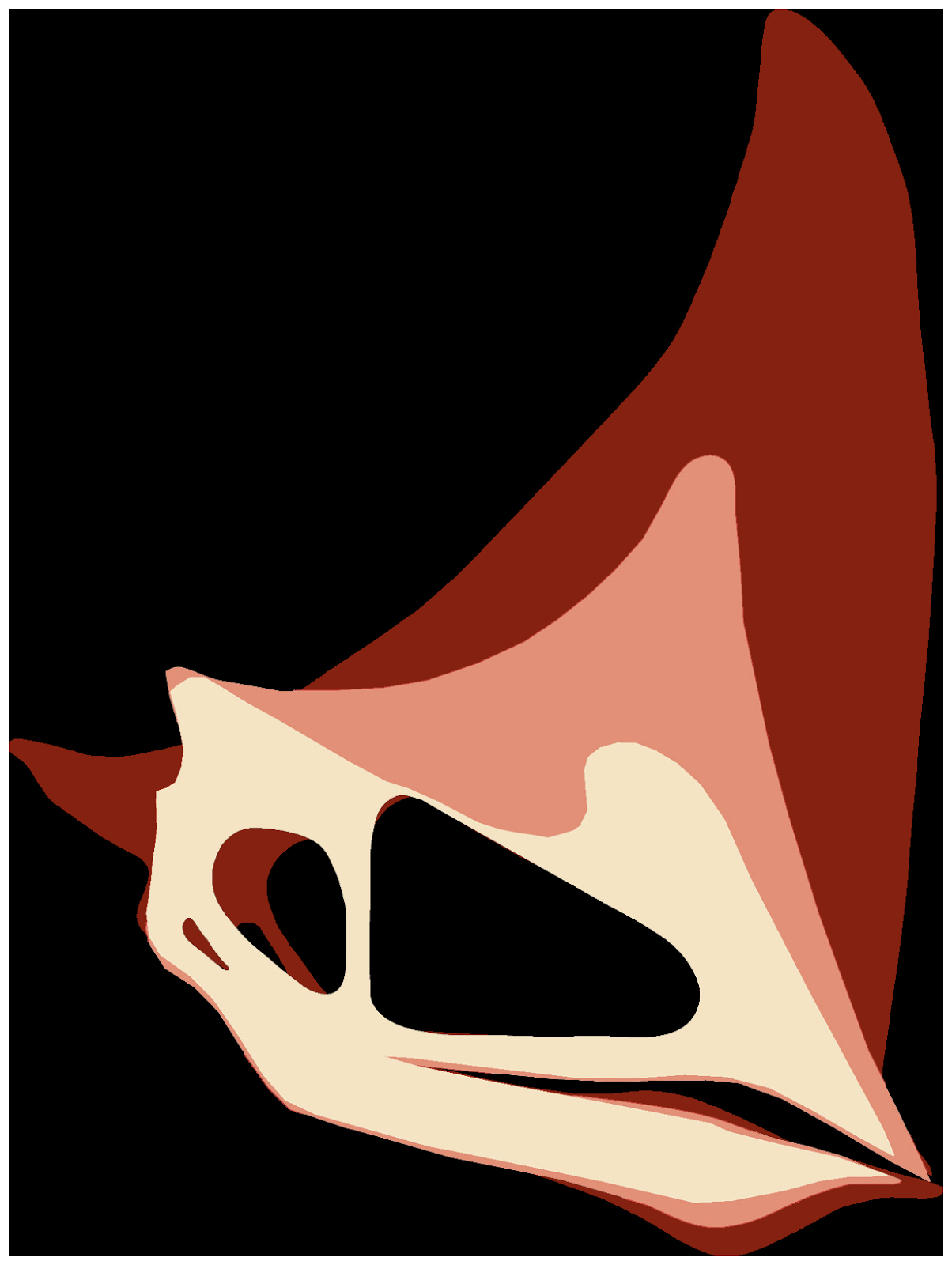 The images above show the ontogenetic variation in Caiuajara dobruskii. The left image shows various skulls from the youngest and smallest (top left) all the way to the largest, oldest individual (bottom right). The image on the right is a very nice schematic drawing showing how the skull changes from the younger individuals (white) up to the oldest (dark red). Images are from Manzig et al. [3].

Like the Hamipterus bonebed, most of these fossils were preserved in 3D, allowing the scientists to understand information such as the actual morphology of the bones, and potentially the internal structure. The geologic bed has additional interesting information. 3-4 different accumulations were found, thought to be formed by separate events. This large accumulation, and the fact that there are a few independent events further supports the thought that some pterosaurs may have had some kind of gregarious behaviour, living together in a colony-like manner around an internal lake in the desert, rather than a fluke one-time occurrence. Furthermore, most pterosaur fossils are found are found in marine deposits, with few from inland terrestrial deposits, let alone deserts (only one found previously). This find has increased our understanding of pterosaur behaviour by adding another piece of evidence to the diversity of pterosaurs. They aren't all big pterosaurs swimming over the oceans and catching fish like is often portrayed.

This find also had a significant amount of media coverage including CBC and National Geographic.

These two bonebeds have provided us with a lot of new information about pterosaurs. First of all, it suggests that pterosaurs may have been gregarious, living and nesting in groups (flocks?), much like modern birds. Whether or not this is a behaviour that they exhibit all year round, or just when nesting or mating is still unknown. While other pterosaurs are known from several ages and sizes, such as Pteranodon, Pterodactylus and Rhamphorhynchus, the ages and species are frequently debated, so ontogenetic sequences can be difficult. However, Caiuajara and Hamipterus provide us with 2 examples of true growth series from different, distantly related pterosaurs, which shows how they grew and how their biology changed over time. Furthermore, these bonebeds are so concentrated that they will continue to unearth a wealth of information about these pterosaurs. The next few years is going to be exciting to see what we learn from both of these!

And another bonus? Both of these studies are open access, so anyone can read about them. Check out the links below.