For the last 2 weeks, I have been on fieldwork in Transylvania (western Romania) with the University of Southampton Vertebrate Palaeontology group. This is part of a long-term project between several groups including British, American, and Romanian organisations looking at the vertebrate palaeontology of this area. This is the 3rd year this Easter trip has run, and was the biggest yet (25 strong at it's largest!).

The area was first recognised as being an important vertebrate palaeontology location by Baron Franz Nopsca, the Hungarian aristocrat and palaeontologist of the late 1800's and early 1900's who is widely thought to be the kickstarter of palaeontology in the region.

When mentioning fieldwork in Romania, and in particular Transylvania, most people think of vampires, castles and mountains, and have no idea about the palaeontological significance (or even topography) of the region. While there are outcrops of many ages, the areas that we are interested in are of Late Cretaceous (Maastrichtian) age, deposited approximately 72-66 million years ago. This is the last time period of the Cretaceous, culminating in the end Cretaceous extinction 66 million years ago that saw the extinction of pterosaurs, non-avian dinosaurs, and many more. There are the Carpathian mountains, and also several plateaus and rivers where much of the fossils come from.

In particular, there are 2 areas of interest in Transylvania that yield Maastrichtian deposits - the lesser known sedimentary Transylvanian Basin in the area of Sebeş and Alba Iulia, and the famous Haţeg Basin to the southwest. During the Late Cretaceous, this area was characterised by an island environment, and is represented by both terrestrial and marine deposits in the area, with the younger terrestrial/continental deposits overlying the older marine sediments. Numerous islands were found in this area of the world, with Haţeg Island being one of the major islands. 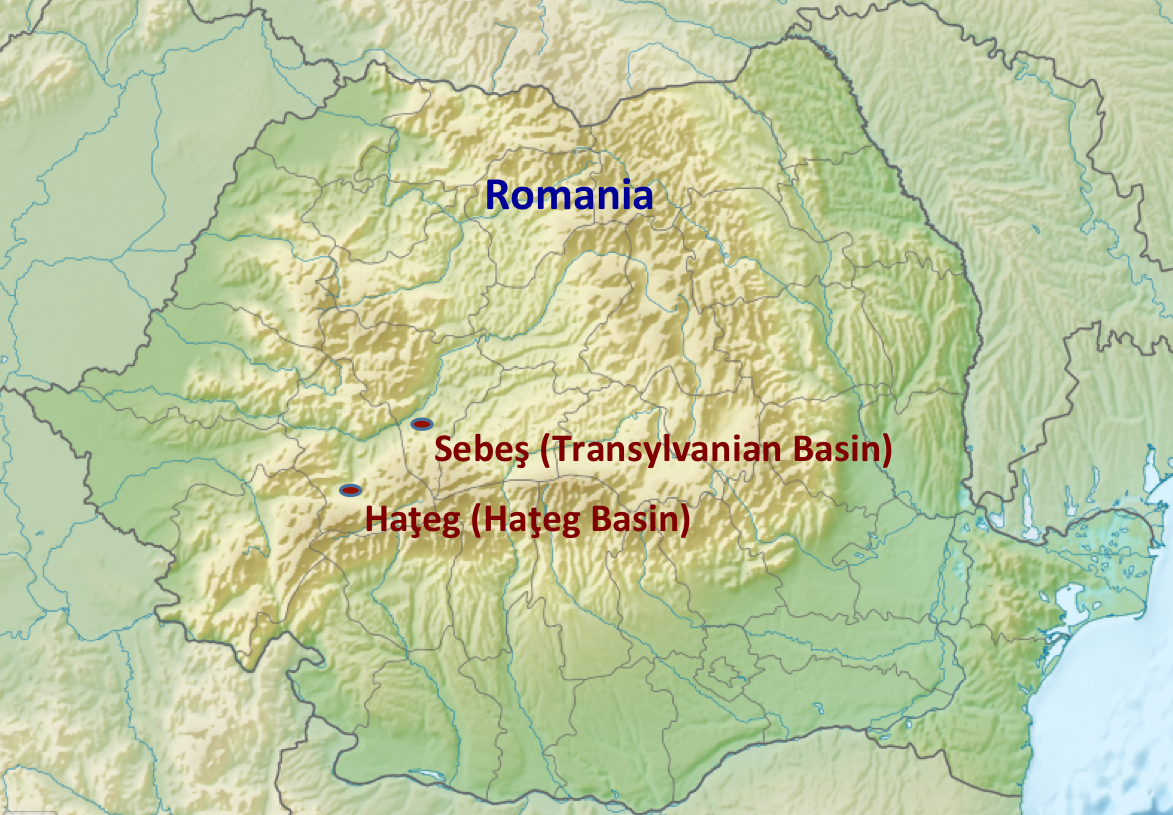 Palaeontology of the Area

There are numerous sites in the Transylvanian Basin that have yielded vertebrate remains, and many different groups of animals have been found. At the river site Sebeş-Glod the theropod Balaur bondoc was found[1], which has an interesting double sickle-clawed foot and has proven to be highly controversial in it's placement among theropods. Balaur was a small theropod estimated at just 1.5m in length from an incomplete skeleton unfortunately lacking a skull. Also from Glod is the azhdarchid pterosaur Eurazhdarcho, which had a wingspan of around 3m and is known from an incomplete skeleton as well with no skull[2]. Further finds include additional dinosaurs (Zalmoxes, titanosaurid sauropods), turtles, crocodylomorphs, and more. At Petreşti (also a river site) a number of fossils have been found including pterosaurs and the ornithopod dinosaur Zalmoxes[3]. A productive site at Lancrăm has produced fossils of numerous groups including primarily titanosaurs (Magyarosaurus) and ornithopods (Telmatosaurus and Zalmoxes), but also turtles and crocodylomorphs[4]. Oarda de Jos is another river locality that may have represented a bird breeding colony[5], but also includes turtles, amphibians, fish, lizards, crocodylomophs, dinosaurs and mammals [4]. While it has been suggested that pterosaur material has been found here, this was actually a misidentified turtle [6-7]. The final site I will highlight from the Transylvanian Basin is that of Râpa Roşie, the "Red Ravine". This is a breathtaking site that reminds me of the badlands of southern Alberta, but with massive imposing red cliffs. Vertebrate fossils from here include crocodylomorphs like Allodaposuchus, turtles, azhdarchid pterosaurs, titanosaurid sauropods, ornithopods (both Telmatosaurus and Zalmoxes), ankylosaurs, and theropods[4]. In the Transylvanian Basin alone there are numerous vertebrate groups represented from several fossil-bearing localities showing just how rich this region is, and this is just a snapshot of all the localities!

While the Transylvanian Basin is certainly fossiliferous, the Haţeg Basin is the more famous of the two, and arguably even more fossil-rich. The first site to discuss is near the town of Sînpetru (or Sânpetru sometimes), and is the stratotype of the Sînpetru Formation. This is now a protected site so no hammering or digging is allowed, but you can still go and take a look to see if anything is there on the surface. Here, several dinosaur, crocodile, turtle and mammal fossils have been found. Not far from Sînpetru is the river site of Vadu, which is set in the middle of the basin with the Carpathian Mountains on all sides. This is a very shallow river with fossils consisting of birds, dinosaurs, crocodylomorphs and much more. Another interesting site is Tustea, which is best known for a large number of dinosaur eggs, including egg clutches, which are thought to be from the ornithopod dinosaur Telmatosaurus or the titanosaurid Magyarosaurus due to the presence of their fossils in this region as well. Additionally, turtle, crocodylomorph, mammal, and pterosaur fossils have also been found here, one of the most famous perhaps being that of the giant pterosaur Hatzegopteryx thambena, which was described first from here and another site Vălioara[8]. Finally one of the most active sites in recent years is that of the Barbat River at Pui. Numerous dinosaur fossils have been found here including the ornithopods Telmatosaurus and Zalmoxes, pterosaur fossils like the recently described short-necked azhdarchid vertebra[9], turtles (e.g. Kallokibotion), crocodylomorphs, mammals, and more.

Interpreting the palaeoecology and palaeobiology of different animals in this region has been a heavily debated and hot topic in palaeontology over the last few decades. Island dwarfism is a process that applies today to animals living on islands where their size is limited and over many generations animals get smaller and smaller as their resources are limited. Nopsca first suggested this was what had happened on Haţeg Island in the Late Cretaceous since most of the dinosaurs in particular are significantly smaller than their contemporaries in other parts of the world. For example, Magyarosaurus was a titanosaurid sauropod dinosaur, a kind of large long-necked dinosaur. Unlike what we are used to seeing as the giant long-necked dinosaurs like Apatosaurus, this dinosaur was less than 2m tall. Additionally the ankylosaur Struthiosaurus is smaller than other members of its group. Currently, very few theropod remains are known, and the best known is that of Balaur, which is similar in size to a small chicken at approximately 50 cm high and 2 m long. With theropods being so rare, what would the main predator in such an environment be? Well one thought is that the giant pterosaur Hatzegopteryx terrorised the land animals as the major predator[10]. With this animal being by far the largest found so far, this is a well supported theory. These points all suggest that the Late Cretaceous islands of Romania were a strange and dangerous place to live.

Unfortunately I can't reveal too much about our trip yet as there are publications imminent and forthcoming, but I will say that we had a very productive year. We visited a number of sites in both the Transylvanian and Haţeg Basins, and found a lot of bone. Some highlights include some pterosaur material (both cranial and postcranial), a partial ornithopod dinosaur skeleton, and some additional bits and bobs. We had a great time wading through rivers, getting snowed on, checking out little museums, and some of us even got to go see a castle (although not the famous Dracula castle, it's still an awesome castle).

Keep following for news on the new finds as they become available. I'll update when we have more news!

Special thanks to Prospectiuni and the National Geographic Society for funding for this trip. Without them, this trip would not be possible!