The evolution of the "lightweight" skeleton of birds

We often read in the literature, or hear it in popular science shows that birds are able to fly because of their lightweight skeleton, but is this really true?

There are several aspects surrounding this issue that I am going to try to discuss. I'll talk about where the idea of the lightweight skeleton comes from, whether or not it actually is the case, and whether this feature truly evolved to allow them to fly.

First of all, where does the idea of a lightweight skeleton in birds come from? This comes from the fact that many bird bones are hollow. Unlike mammal bones which have generally thick walled bones filled with marrow, bird bones are commonly filled with air. This is related to their breathing system and the intake of oxygen. In mammals, this is done primarily in the lungs, but also the trachea, bronchi, and diaphragm. Birds, however, have very different respiratory systems. They have air sacs in addition to lungs which is significantly more efficient than the typical mammalian system. These air sacs act in a manner similar to bellows which allow for air to be pushed through uni-directionally. This allows for consistent movement of the oxygenated air in one direction, which prevents the mixture of oxygenated and de-oxygenated air. Another unique feature related to the avian respiratory system is that the air sacs have diverticulae, finger-like projections that invade/hollow out the bones. This commonly occurs in the arm/wing bones of birds, and occurs at varying degrees of pneumatisation (air within the bones) throughout the wing [1].
O'Connor [1] found that the pneumaticity index (the number of elements pneumatised in the skeleton) varies throughout birds with heavier birds such as swans and geese having higher degrees of pneumaticity. If heavier flying birds have more pneumatic skeletons, then it stands to reason that they need pneumaticity to lighten the bones, right?

Well maybe... but there's much more to this topic than originally thought. A few studies have suggested that birds don't have that light of skeletons after all. First, Prange et al. [2] compared the dried skeletal mass of birds and mammals to their body mass and found that the relationships were remarkably similar in these phylogenetically distant groups. It was always assumed that the skeleton of birds was lighter than those of similarly sized mammals, but this seems to suggest that bird skeletons are just as heavy as mammal bones for a similar size. 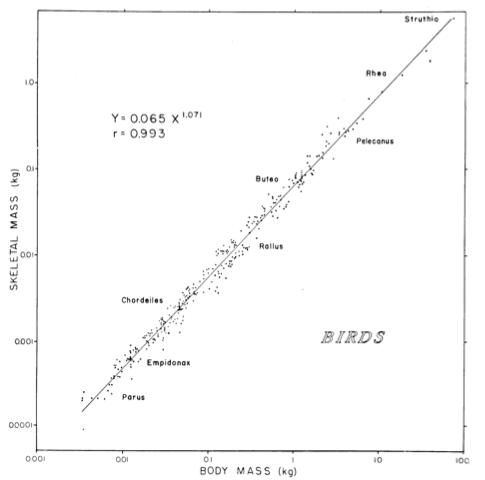 Left (top), the body mass - skeletal mass relationship found in birds, compared to the same relationship in mammals (left bottom). The regression was found to be very similar in both. From Prange et al. [2] 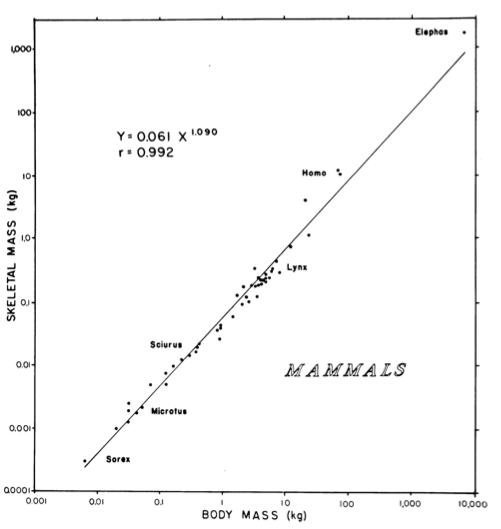 Now I've spent a lot of time looking at this relationship and discussing it with people and I always thought there something a bit off with the conclusions, but never could fully put my finger on it. However, Matt Wedel (a sauropod palaeontologist and expert on pneumaticity) very correctly pointed out that by weighing the dry skeletal mass of the mammals, the authors had essentially artificially pneumatised the mammal bones. While the actual bone     itself may not be heavier in mammals, it most certainly would be in a living animal when the bone would be filled with marrow, unlike the hollow air-filled bird bones. This means that the relationship may not be that shocking after all when compared with mammals. Interestingly enough, when marrow is accounted for, small rodents appear to have similar soft tissue mass - skeletal mass proportions to birds, while bats have a heavier skeleton for a given amount of soft tissue [3]. 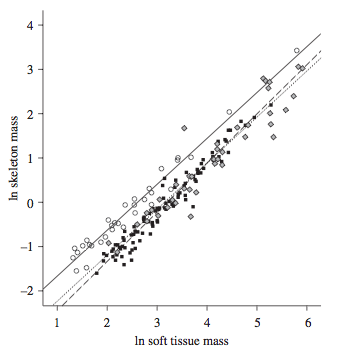 The graph to the right shows soft tissue mass - skeletal mass relationships in passerine birds (black squares), and rodents (grey diamonds) and bats (white circles) which have had 15% of the dried skeletal mass added to it to account for marrow. From Dumont [3].

More interestingly, Dumont [3] found that the actual bone density in birds and bats was higher than those found in the similarly sized rodents. While the bony material is less, the density appears to be slightly higher.

But how do density and pneumaticity affect the bone? Here is where I believe this all comes together. Both density and pneumaticity have the same effect as both the pneumaticity and density increase, so does the bone's stiffness and strength. Bone density is proportional to stiffness and strength, and the shape affects stiffness. Hollow bones follow the same principles as a an I-beam. If you look at any construction site, you'll see that the beams used for major load bearing parts are I-shaped (that's why they're called I-beams). This is because bending results in high stress in the areas located furthest from the neutral axis. Material must be concentrated along these areas of high stress (the horizontal portions of the I), whereas less material is needed along the neutral axis (the central portion between the two horizontal axes). This is the same principle seen in hollow bones. The neutral axis is the central hollow shaft of the bone, where little stress occurs, whereas the bone is concentrated towards the outside, where the stresses occur. A perfectly circular hollow cylinder will be stiff in all directions, unlike an I-beam which is easier to bend one way than the other. However, the details of the direction of stiffness in bones is an entirely too complicated topic for now, and I will likely discuss later in a different post. 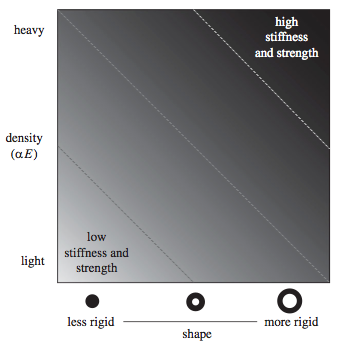 Right: image from Dumont [3] showing how density, and the shape of the bone relate to stiffness and strength.

For now, the important thing is this: birds have hollow bones which make them more stiff.

Now the title of this post is the evolution of the lightweight skeleton of birds, and I haven't talked at all about evolution yet. So where does evolution come in, you might ask? Well I think, and I'm not alone in thinking this, that the hollow pneumatic skeleton of birds (and in fact pterosaurs, the extinct flying reptiles I study) evolved not purely as a weight-decreasing method, but likely in a more complicated intertwined way of increasing strength, decreasing weight, and improving the respiratory system while flying. This is certainly not a novel idea, but it's about time this idea of the hollow bird skeleton evolving purely as a means to decrease mass be put to rest. I've seen it several times on "science" shows, and it's brought up constantly in the media. It's not all about mass reduction, but likely a complicated number of things that affect each other.

In the future, I'll talk a bit about the pneumaticity in pterosaurs, as that's part of my PhD so look forward to that!