Last week, a press release went out from Texas Tech University on some findings that were presented recently at Geological Society of America annual meeting. This is not abnormal. What is unfortunate, is that the press release covers a talk based primarily on a study by Chatterjee and Templin from 2004, and other results that have not been peer reviewed. Mark Witton, Mike Habib, and Brian Switek have all done a great job discussing why this is bad, troublesome, and poor science (you can check those out here, here, and here), so I won't get into that. For me, having spent the last year looking at pterosaur mass and how we estimate it, my big problem is the mass of Quetzalcoatlus associated with this study.

For a super brief explanation on how some mass estimates are determined for pterosaurs, check out my previous post on pterosaur mass estimation. Chatterjee and Templin (2004) determined that 70 kg was the absolute maximum that Quetzalcoatlus could be, based on estimates by Atanassov and Strauss (2002). This was determined using a principal component regression method based on different skeletal measurements. For more information, check out their poster here. The rest of the conclusions in Chatterjee and Templin (2004) are based on the 70 kg mass, and fail to take into account recent studies like the quadrupedal launch hypothesis by Habib (2008). They determine that if Quetzalcoatlus was more than 70 kg, it would not have been able to take off, and that at 70 kg, it would have needed a hill or cliff to successfully take to the air. This is based largely on the theory that pterosaurs took off the same way as birds, from two feet, rather than the quadrupedal launch. When accounting for the quadrupedal launch, and other adaptations, a higher mass is possible. Other estimates for Quetzalcoatlus range from 259 kg (Witton 2008) to 544 kg (Henderson 2010).

Aside from that, there is a huge problem with a 70 kg Quetzalcoatlus, which has been discussed by Witton (2008): in order for Quetzalocoatlus to be 70 kg, it would have required it's body to be about 60-90% full of air. Recently, the 70 kg estimate was put into prospective for me. First of all, an important piece of information is required. Quetzalcoatlus is about as tall as a giraffe, with a wingspan of 10-12 m, as seen in a great image by Mark Witton: 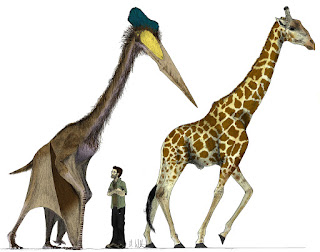 That is a HUGE flying animal! Now picture a 70 kg giraffe. For the record, giraffes are about 1600 kg on average. Putting it down to 70 kg is a bit impossible. This was even more obvious to me when I realised that my brother is about 70 kg, and probably pretty similar in size to the guy in the picture. So now imagine taking that mass, and spreading it over the size of a giraffe. It doesn't work! Yes, pterosaur bones are lightweight, but they are not THAT lightweight. According to Witton (2008), the skeleton itself was 18 kg, and other evidence suggests that might be a low estimate (Martin and Palmer 2012). How then is it supposed to have only 52 kg (maximum!) of muscle, still be able to successfully cover its body in skin and muscle, AND be able to fly?! It's not possible! I do not understand at all how someone can justify a 70 kg pterosaur with a wingspan of 10-12 m, and to my knowledge, they have not tried to explain it, or to scientifically address the heavy mass estimates. Not cool!

So basically, my question is this: how does anyone expect a 70 kg Quetzalcoatlus to have the muscle necessary to fly, walk, or even live?! The answer: it doesn't. Which is why the 70 kg estimate and anything based off of this estimate is incorrect.