Dinos at the Bristol Zoo

Until November, the Bristol Zoo has one of those travelling dinosaur exhibition, featuring a number of animatronic dinosaurs spread throughout the zoo. Seeing as I work(ed) at an educational park in Canada that features over 40 animatronic and mostly life-size dinosaurs, I was of course interested in what the zoo had to offer (shameless plug for Jurassic Forest of course). Here's a short review of what I saw at the Bristol Dino Zoo.

Ok so I may be slightly biased by the fact that I have a lot riding on the success of Jurassic Forest in Canada, but I have to say, these dinosaurs are quite unimpressive compared to what I'm used to. First of all, most of them are not even close to life-size, which makes them kind of sad. The animatronics were pretty bad as well. At Jurassic Forest, the animatronics run on motion sensors and cycles, so when the sensor is triggered, they will go through their cycle of movement, then a cool-down period required to keep them from overheating. The dinos at the Bristol zoo seem to go off constantly, which although is really neat, means that the movements are pretty bad. They are quite slow and restricted, presumably to prevent overheating. Here is a video of the Amargasaurus and baby to get an idea.
Another thing that I found very interesting is the noises. I have no idea who decided on the noises for these dinosaurs, but man, some of them are bad. The Coelophysis sounded kind of like someone was shooting something, and I can't even begin to explain the noise of Edmontosaurus. One description given by my friend Davide, who came with me to check out the dinos, was that it sounded vaguely like a rubber ducky. Unfortunately the video has a lot of background noise, so I won't post it here. I will however post a picture of the Edmontosaurus, which made me want to cry a bit. 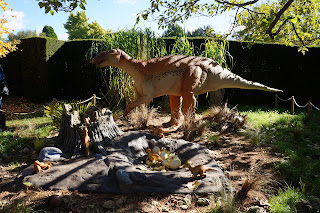 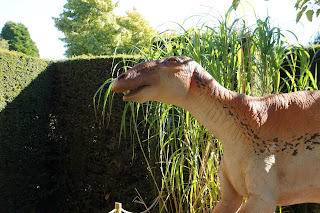 In general, the the information about each dinosaur was pretty good, even if the actual reconstructions weren't. For example, they had a Dilophosaurus that spat water ("venom"), but if you actually read the sign, it stated that there was no evidence that it did that, and that it was made up for the movies. Even though having a dino do that gives the wrong impression, thumbs up for accurate signage!

In general, I would say the worst dinosaur was the Brachiosaurus. I have no idea what they were trying to do to it, but it just looked funny. I don't know what I would say is the best. The T. rex wasn't too bad, but he was very fat, and the Ornithomimus wasn't bad (so I've been told, I really know little about ornithomimds). All-in-all, it was good fun, even if it was mostly laughing at the reconstructions. Here's a few pictures of the dinos they had.
And of course I did see some actual animals. My favourite would definitely be the seals. I could watch seals for hours! Monkeys of course are always fun to watch. I really wanted to see the pygmy hippos and the river otters (I love them), but couldn't actually see them in their pens. I also got to see a capybara for the first time, which was pretty awesome, as well as a huuuuge fruit bat!