Pterosaurs of Stuttgart and Munich

As part of my PhD, and with the help of the Geological Association of London, I've been fortunate enough to go on several research trips to some museums in Germany including Tübingen, Karlsruhe, Stuttgart, and Munich. Stuttgart and Munich in particular have excellent pterosaur collections, including many historically significant specimens.

The Staatsliches Museum für Naturkunde in Stuttgart (SMNS) is a large museum that houses one of the state collections of Baden-Württemberg (the other one being in Karlsruhe). The museum has a significant collection of material from the area, as well as some excellent material on display, but I'm only going to talk about some interesting pterosaur material.

Campylognathoides
Campylognathoides zitteli was first found in 1858, from the Early Jurassic deposits of Württemberg. In 1893, a new specimen was discovered from the Holzmaden shale, and was named as a new genus and species, "Campylognathus zitteli", based on the specimen found below. It was later discovered that the genus was already in use for an insect, and so a new genus, Campylognathoides, was named in 1928.
Austriadactylus
The type specimen of Austridactylus cristatus was found in the Alps of Austria, dating back to the Late Triassic. This is one of the earliest pterosaurs known so far as Triassic pterosaurs are extremely rare. They are also very poorly preserved, and Austriadactylus is a perfect example of this. Like many pterosaurs, it is completely crushed and incomplete, but some features can be seen. It has many primitive pterosaurian features including a long flexible tail (which lacks the stiffening rods seen in later pterosaurs) and heterodont teeth.
Miscellaneous
Also in the SMNS collections is some miscellaneous pterosaur material that shows some interesting features. Specifically, there are some 3D, beautifully preserved pterodactyloid fossils that show the internal structure of pterosaur bones, the delicate trabecular structure that existed in the heads, and the trabeculae that occur in the shafts. 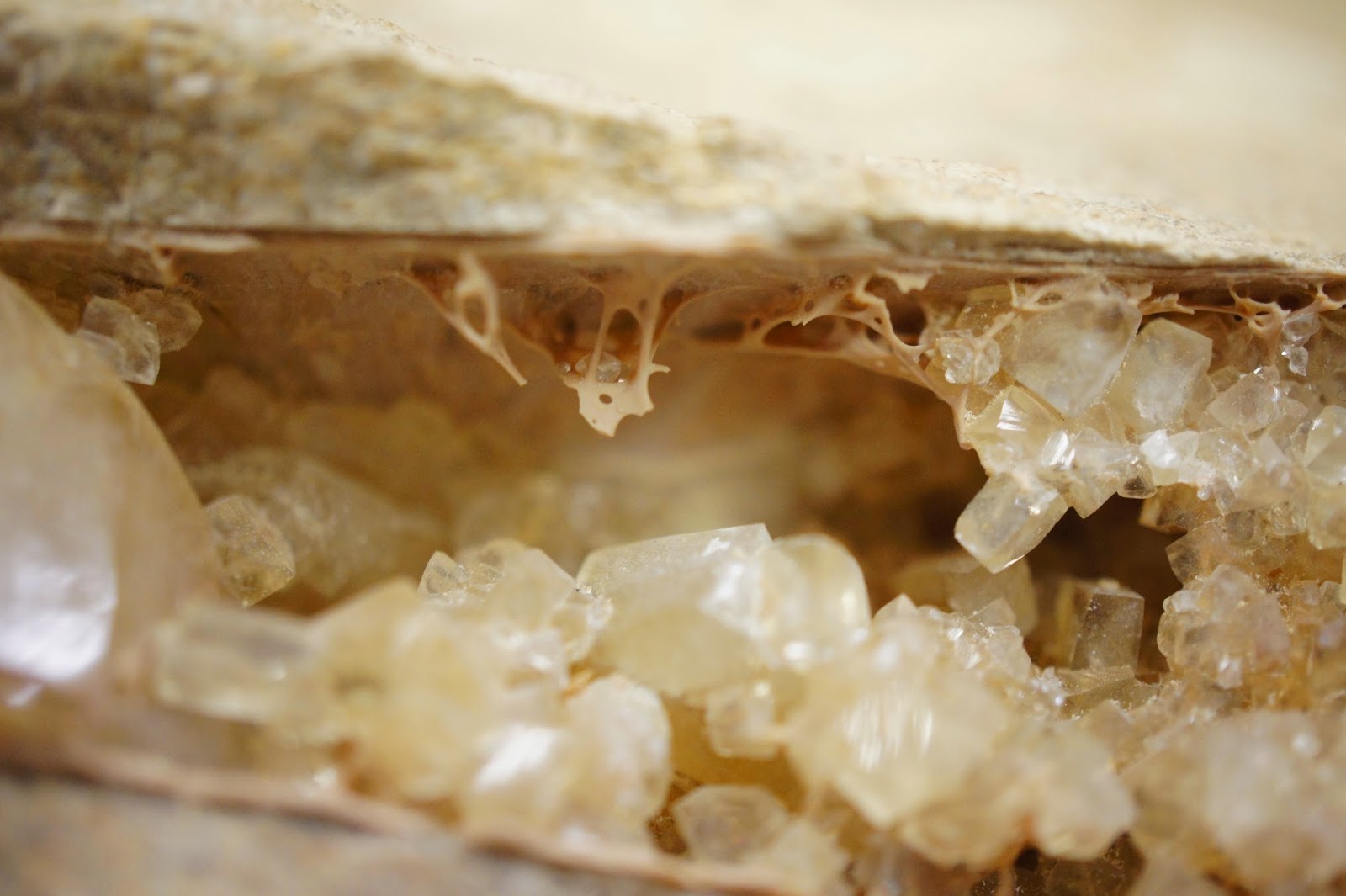 The Munich palaeontology collections exist in the Bayerisches Staatssammlung für Paläontologie ind Geologie (BSP), and are quite extensive, as shown by the large number of researchers there after the Society of Vertebrate Paleontology meeting in Berlin. It is especially great for pterosaurs, including numerous historically significant specimens, including the first ever pterosaur known to sciences, Pterodactylus antiquus. Unfortunately, that specimen is so valuable that it is kept out of prying eyes and is only accessible under specific permission, so I wasn't able to see it. However, that aside, there were many other significant specimens for me to see.

Aerodactylus
This genus has a complicated history. In 1860, a new species, "Pterodactylus scolopaciceps" was named by Meyer after being found in the Bavarian Solnhofen limestone from the Jurassic. This was later synonomised in 1883 with "P. kochi" which was thought to be a smaller species of Pterodactylus. However, over the years it has generally been agreed that "P. kochi" is just an ontogenetic stage of P. antiquus, meaning that they are just smaller, younger individuals. The original type specimen of "P. scolopaciceps" was more recently re-described as a new genus, Aerodactylus [2]. While all specimens of A. scolopaciceps are considered to be juvenile, it has been suggested there is enough of a difference to be a different genus.
Germanodactylus
Germanodactylus cristatus was first described as a specimen of "P. kochi" by Pleininger in 1901 after being discovered in the Solnhofen lagerstätt, another Late Jurassic German pterosaur. It was then described as a new species of Pterodactylus, "P. cristatus". In 1964, a new genus Germanodactylus was named, and BSP 1892 IV 1 was named the type specimen of G. cristatus. The precise position of Germanodactylus within the Pterosauria has been debated, but it is definitely a pterodactyloid pterosaur.
The Zittel Wing
By far, the most historically interesting specimen and biggest surprise for me came when I opened up a drawer and found the "Zittel Wing", a nearly complete Rhamphorhynchus wing. This wing was described by Alfred von Zittel in 1882. It was a significant find then, and to this day still represents one of, if not the best preserved wing membrane of a pterosaur. Nearly all the wing bones are complete, and the membrane is preserved from the tip of the wing finger (the elongated 4th finger) to underneath the humerus. It showed the width of the wing, as well as the actinofibrils, which are the strengthening fibres that provided the pterosaur wing with strength when they are overlain in criss-crossing layers. This was the first sign at how pterosaur wing membranes were formed.
3D ornithocheird wing bones!
For me, a highlight was looking at the 3D preserved specimens from the Early Cretaceous of Brazil. These were large pterosaurs, with wingspans of 5 m or so, and were part of the pterosaur revival of the 1970s to 1990s after being described in detail by Peter Wellnhofer. These bones are all very well preserved and have mainly been prepared out of the rock, meaning that you can pick them up, move them around, and really start to understand them. These were definitely the highlight for me!

Those are my highlights from the natural history museums in Stuttgart and Munich. There were many more interesting specimens, and I could go on for ages about it, but I think I'll stop here!