My side project: Jurassic Forest

Some of you may have heard of this before, or may know that I'm involved, but most of you probably have no idea what I'm talking about. Two years ago, just north of Edmonton, Canada, an animatronic dinosaur park opened called Jurassic Forest. This is an entirely privately owned venture that focuses on being educational, and of course fun for kids of all ages. I was fortunate enough to find out about the park before it opened. Being an undergraduate student in palaeontology at the University of Alberta at the time, I thought maybe I could work as a guide or something so I gave them a call. To my surprise, they had no scientists employed at the time, and I was in the very lucky position of having been told about it and contacting them. And thus began a new and exciting chapter in my life.

Starting in May 2010 before the park opened, I worked on all things scientific and educational. I created signs for the forest ranging from decomposers to amphibians to, of course, dinosaurs. I made content for over 100 signs to be posted around the park, as well as edited material already made for signs and school programs. I was also responsible for training all of our guides, making sure they knew what they were talking about while walking through the trails. In July 2010 we opened to the public. It was an amazing feeling walking around and listening to what people were learning, and hearing the praise about this facility that I was so intimately involved in. We opened with a number of animatronic dinosaurs (about 40 if I recall), some more realistic than others, but most of them are somewhat life-size. It was pretty amazing. Jurassic Forest is set outside in a natural boreal forest, meaning the dinosaurs (and other creatures) are in a slightly more natural setting than in an indoor facility (although the plants aren't quite accurate). The creatures are set back from the paths in a non-frightening, more natural setting, like you may have seen millions of years ago. It's pretty cool.
Jurassic Forest isn't open in the winter though, so we closed down in October 2010, and got ready for the new season. This was a fun winter. We did a major overhaul of all the school programs we had made previously, and made them much more applicable to the Alberta curriculum. In May 2011, we opened for our second season, with an addition: Spinosaurus. After a very rainy and unpleasant May, we had a great rest of the season. Unfortunately, in order to start my Master's in the UK, I had to leave Jurassic Forest in September. It was like my second home, and my second family, and I was sad to leave. But it was time to move on. A career in research doesn't happen while I'm wandering the trails talking to families apparently. I left for England sad that I had to leave Jurassic Forest, but determined to stay connected. I'm still working for Jurassic Forest, running their Facebook and Twitter (@JurassicForest) pages (you should follow us!). I thrive to keep things as scientifically accurate as possible, but still interesting for people. In June, we (they?) welcomed two more new dinos to the park: Pachyrhinosaurus and Troodon. This month, my newest side project has begun: a blog called Mesozoic Mondays where I talk about several aspects of the Mesozoic, each Monday. This is a pretty general, easy blog to follow. The goal is to teach people who may not know a lot about dinosaurs or the Mesozoic. It's been fun so far, but I'm always looking for suggestions and comments! If anyone wants to give me some suggestions, that would be awesome.

I really enjoy working for Jurassic Forest even though I'm in England now. It's a good chance to write about some things I'm really interested in that's not necessarily related to my thesis. It's also nice to be able to put my brain to use and talk about some things I've learned over the years! Anyone who is in the Edmonton region, I would definitely recommend a trip to Jurassic Forest, even if it's just for a walk in the park. It's pretty neat, and from what I've seen, much better than similar parks out there. 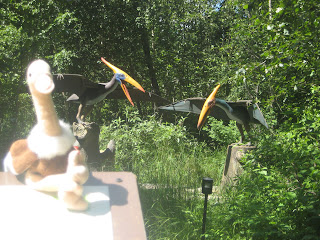