From April 5 to January 4 the American Museum of Natural History in New York (AMNH) had a special exhibit called "Pterosaurs: Flight in the Age of Dinosaurs". I was lucky enough to make it to see the exhibit over the final weekend while I was on a research trip to see the collections.

The exhibit was curated by the AMNH palaeontology curator Dr. Mark Norell, and Brazilian pterosaur expert Dr. Alexander Kellner, with some help from Dr. Mike Habib, a palaeontology and flight expert (and one of my many supervisors). It included fossils from all over the world, and was generally very well done in my opinion, encompassing some controversies in pterosaur palaeontology, old and new ideas, and some of the most recent studies and finds. It was also accompanied with a fantastic gift shop including a very-well illustrated book based on the exhibit.
It started in the same way as most exhibits with a background of pterosaur research, explanation of what pterosaurs are, and an overview of their diversity. They discussed pterosaur locomotion, including some fossils of footprints and various things. The exhibit was full of life-size skeletal models of pterosaurs that hung over top of you as you went along, which was a really cool addition, including Dsungaripterus shown here.

It was starting at about this point in the exhibit that I started getting really excited. First of all, there were some really well done (and also simple) educational displays explaining features like the wing structure in pterosaurs (vs. birds and bats) and the hollow aspect of the bones. Of course anyone who has read my blog before and seen my posts on pneumaticity in pterosaurs and birds will guess that I like hollow bones. I enjoyed the explanations and diagrams on the hollow bones and the comparison of pterosaur bones to airplane wings with the trabeculae acting as struts (see image below). However, there is some evidence that the trabeculae in the shaft actually didn't do a lot in terms of strengthening the bone and preventing bending or torsion, but still a cool analogy. 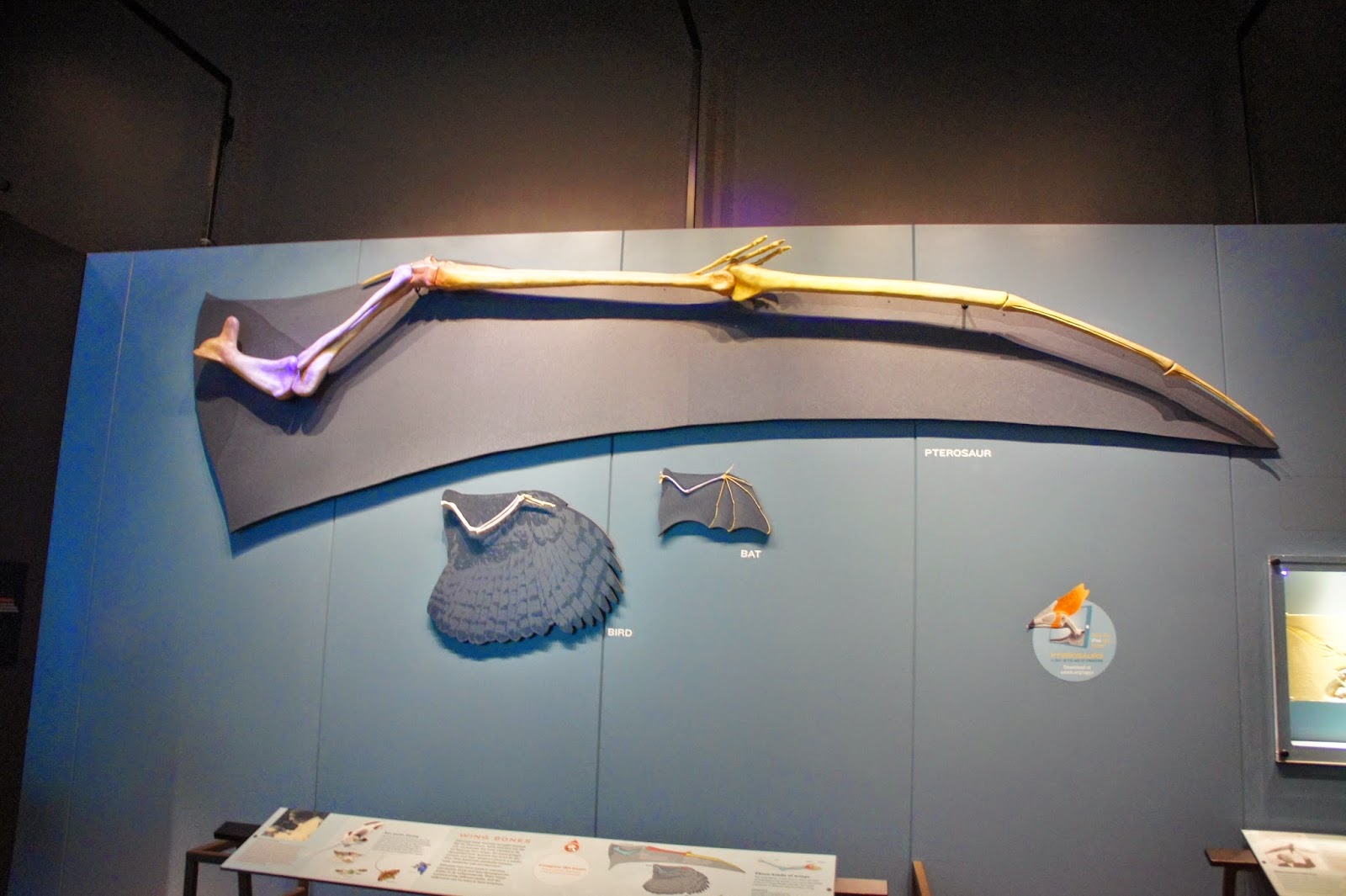 The next room of the exhibit focused on the flight capabilities of pterosaurs, and included a number of flight games that allowed people to stand in front of a camera and pretend to be a pterosaurs. It was entertaining to watch the kids flap around and try to be a pterosaur while the pterosaur on-screen mimicked what you did. They included flying, taking off, taking off from water, picking up fish from water, chasing insects, etc. The unfortunate thing about these videos is that they were so distracting to the kids that most of them failed to notice the giant life-size model of Quetzalcoatlus northropi suspended from the ceiling above. It was so big (and the lighting was so poor and I forgot my flash) that I didn't get a picture, but it was impressive. Along with it was a replica of the humerus, just to show how big it really was.
The rest of the exhibit focused on looking at the different sizes, shapes, and possible functions of the cranial crest, followed by a special focus on the Araripe Basin of Brazil where a large number of exceptional pterosaur fossils (and much more) come from.

The highlights of the exhibit for me included:
1. The "Dark-wing" Rhamphorhynchus - Anyone who works on pterosaurs knows this fossil as one of the best preserved, three-dimensional Rhamphorhynchus fossils from the Solnhofen in Germany. The best part of this fossil, however, is that it also preserves a large amount of soft tissue, and is the fossil that gave us the first true insight into the internal structure of the wing membrane. It is a truly wonderful fossil, and is actually owned by a private fossil collector in Germany, so is rarely seen on display. This was the first time the specimen had been on display outside of Germany, and it was a joy to see. I was hoping to be able to examine it after the exhibit was done, however, that was not possible.
2. AMNH 22555, one of the best preserved specimens of Anhanguera santanae - This specimen is a beautifully preserved skeleton including the head, neck, much of the pectoral girdle (but unfortunately only bits and pieces of the wing), trunk, pelvic girdle, and some of the legs. It shows very well how weird the body proportions of pterosaurs can be with a massive head, long neck, small trunk, and tiny pelvis. It's especially interesting to me for several reasons: a) it was described by pterosaur legend Peter Wellnhofer; b) It is 3-D and therefore much of the original structure can be determined; and c) I have had the opportunity to view CT scans of it thanks to Pat O'Connor, who previously scanned the specimen. After the exhibit finished, I also was lucky enough to examine it up close in collections for several days.
3. Romanian pterosaurs - At the very end of the exhibit, where many people walked past thinking it was not interesting, was a small display on the "next big thing" in pterosaur palaeontology, including 2 casts of giant Romanian pterosaur bones. This is interesting to me first of all because my research group in Southampton does field work in Romania where these bones are found and is involved with these studies (and I was lucky enough to have one of those bones placed in front of my by my supervisor early in my PhD), but also because as a pterosaur palaeontologist any giant pterosaur bones are interesting to me. I was also happy to see an image by my friend and great palaeo-artist Mark Witton in the case, showing Romanian pterosaur Hatzegopteryx. There is some great stuff coming out of Romania, and I'm looking forward to heading back at the end of the month. Maybe we'll find more!

Of course with any exhibit, and with a pterosaur one in particular, there are going to be some things I'm unhappy with. There were 3 I can think of, but they have annoyed me quite a bit. These are:
1. The constant depiction of Nyctosaurus with a fleshy sail-like head crest - In the portion of the exhibit on head crests, there is a replica of the famous crested Nyctosaurus skull. Along with this is a portion of text that read "Most scientists think these bony prongs were connected by soft tissue... Some think they could have remained bare, like deer antlers". I was quite surprised when I read this, and immediately consulted with fellow pterosaur-palaeontologist Dave Hone, and we agreed that we didn't know anyone that still thought there was soft tissue. In fact, there is no evidence to suggest that there was soft tissue on their crest... Every image of Nyctosaurus in the exhibit was reconstructed to have a giant, awkward sail on it's head!
2. Discussion of skim-feeding - This isn't particularly surprising as there are a number of people that support this, but there is also a significant amount of evidence that says they were not able to do this. Dip-feeding, yes. Skim-feeding, no. I haven't looked at it empirically, but I can just think mentally that once a pterosaur opened it's mouth in the water there would be so much drag that it wouldn't be very good for the animal's jaw. I know that Darren Naish and Mark Witton have looked at this a lot, and it seems to make sense that they couldn't feed that way. However, there was no discussion of these problems or other views, not entirely surprisingly.
3. "Dawndraco" cast - This bit has annoyed me for a few reasons. First of all, there is much debate about the validity of this species. Despite this, there was a massive cast and focus on the species, and no mention of the other viewpoints. This leads me to my next problem with it, which you may be familiar with if you read my post on fossil casts. It's a minor problem, but it still annoys me... The original of this specimen is housed at the University of Alberta, my old university. The specimen on display at the AMNH was a cast of the original. Despite other casts in the exhibit correctly stating that they were casts, this specimen said it was the original skeleton. And to frustrate me even more, the specimen number was incorrect! This specimen has a history of being incorrectly referred to in the literature, despite being one of the best pteranodontid specimens in existence. Give credit to the correct institutions, label specimens correctly, and don't say it's an original when it isn't... I'm sure it was an honest mistake, but how can so many "honest mistakes" come with one specimen?!

So there's my take on the AMNH pterosaur exhibit. Anyone who wants to know more about it can go to their website where there are videos to watch and some more information. I wish I could have posted this in time to recommend people to go, but unfortunately, I only got to see it on the last day... However, I get to enjoy it again each time I have a shot or make a drink from this awesome shot glass: 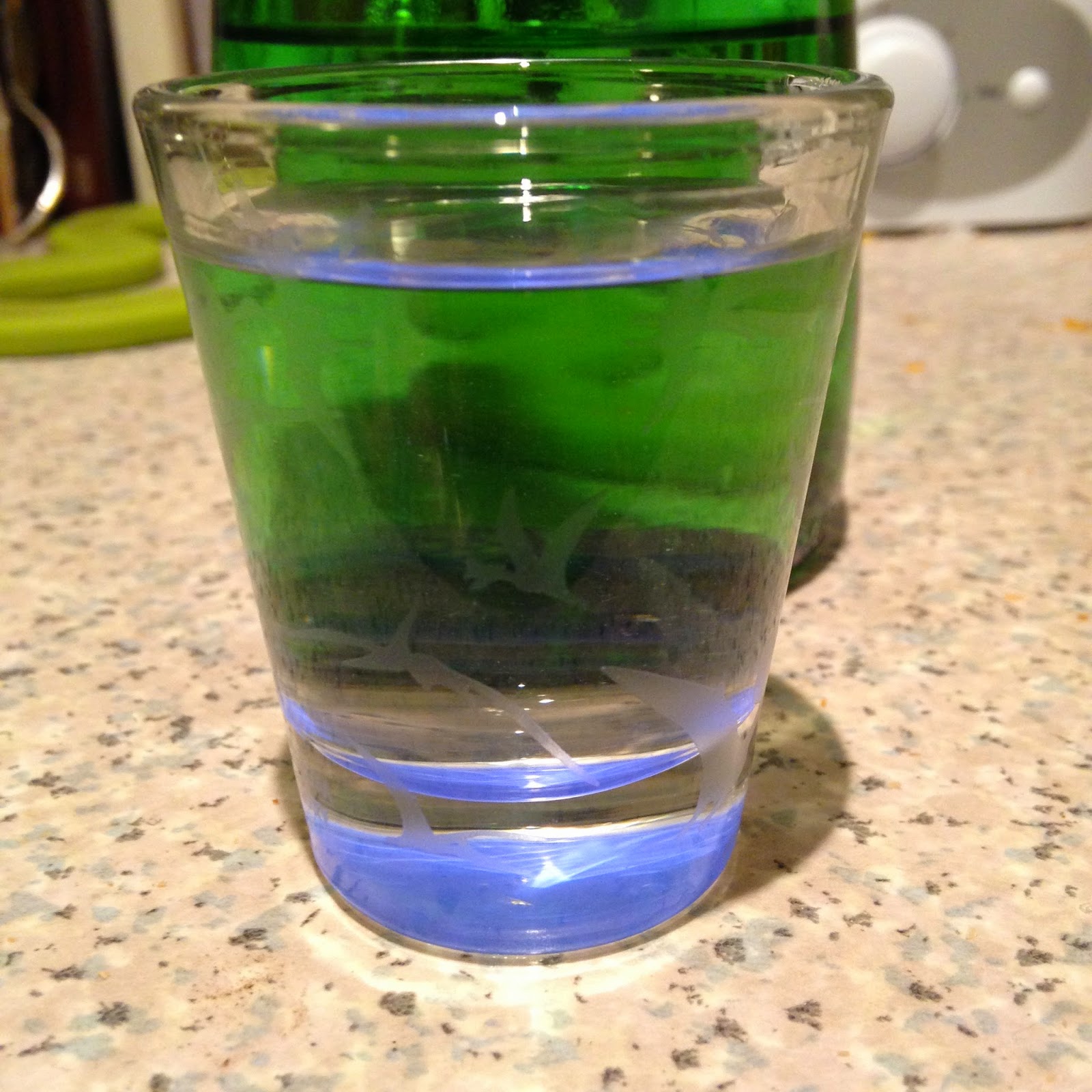