Italy, Germany, and Pterosaurs, oh my!

As promised, here's another post about what's happening in my research life. In my last post, I mentioned that I was going to have a crazy busy summer of travelling. Well that has indeed started...

First off, I went to Italy for my first European Association of Vertebrate Palaeontologist's meeting. I went a few days early to visit a friend, where we went to see some dinosaur footprints at Lavini di Marco near Lake Garda. It was a wonderful site with theropod, sauropod, and ornithopod footprints. This site is dated to the Early Jurassic, and were uncovered by a rock slide. The prints are meant to represent Camptosaurus and Dilophosaurus, and a few others not identified to genus. There was another surface that supposedly had trackways going up it, but despite spending about 20 minutes looking, we did not see any... 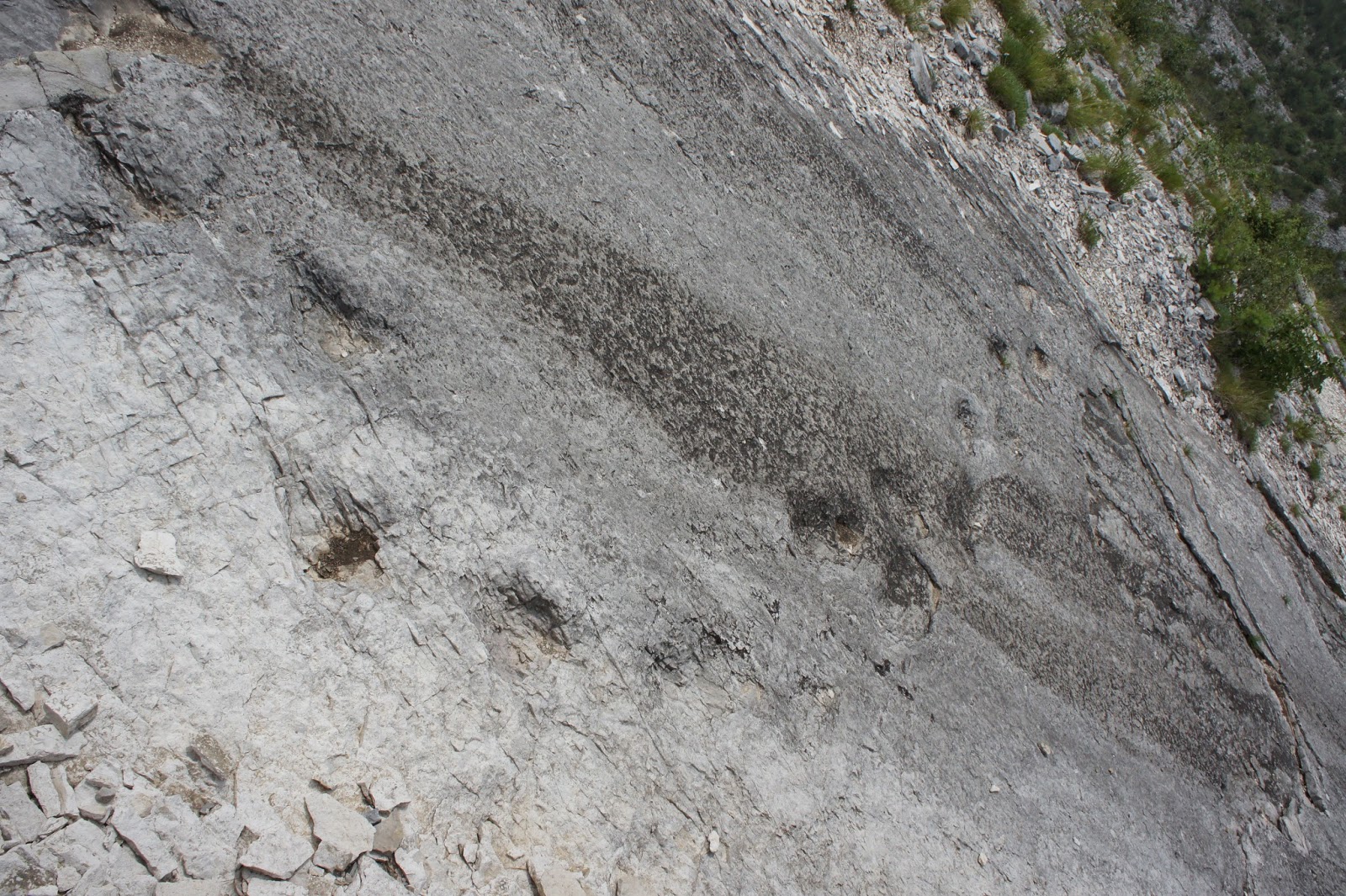 Next up was EAVP in Turin. As I mentioned, this was my first time at the meeting. I enjoyed the conference, as it gave me a chance to speak to some researchers from outside of the UK, including other pterosaur workers. The conference was great. I presented some of the preliminary work I've done in my PhD and did in my MSc on pterosaur bone mass and pneumaticity. I enjoyed the relaxed, but still scientific and interesting nature of the conference, and would think about attending again. Next year it is going to be in Poland, but I don't think I will be able to attend unfortunately.

From Turin, I started my pterosaur adventures in Germany, first heading to Tübingen, then to Karlsruhe. Tübingen was a beautiful city, and had a few interesting pterosaurs as well. The first day consisted of looking at mainly flattened remains of Cycnorhamphus, Dorygnathus and Rhamphorhynchus, but they were interesting historical specimens with a some possibilities for cortical thickness measurements, including the type specimen of Cycnorhamphus suevicus (below). 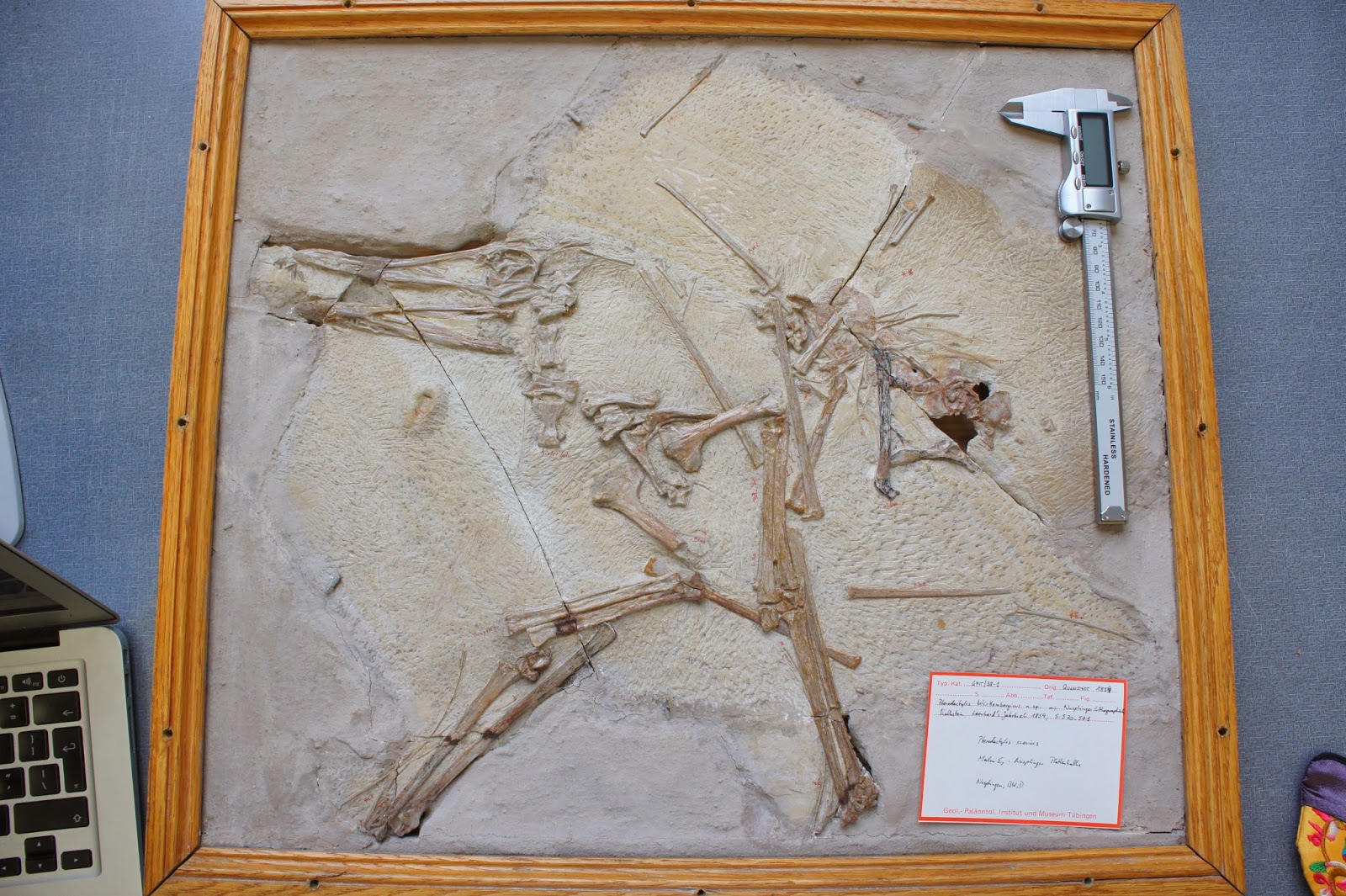 On the second day, we discovered a forgotten specimen on loan to Tübingen, which made me very excited. They have a 3D dsungaripterid from China, described as Lonchognathosaurus, but thought to be a junior synonym of Dsungaripterus. Anyone who knows pterosaurs understands why this is exciting for me looking at biomechanics and mass - while most pterosaurs are known for having extremely thin-walled bones (mm to sub- mm in places), dsungaripterids have much thicker bones, reaching several mm in size. Fortunately for me, most of the bones were broken, which allowed me to look into the bones and get some good estimates of thickness. Hurray!

My next, and final stop was the Staatliches Museum Für Naturkunde, Karlsruhe, where I was greeted at the museum by this guy: 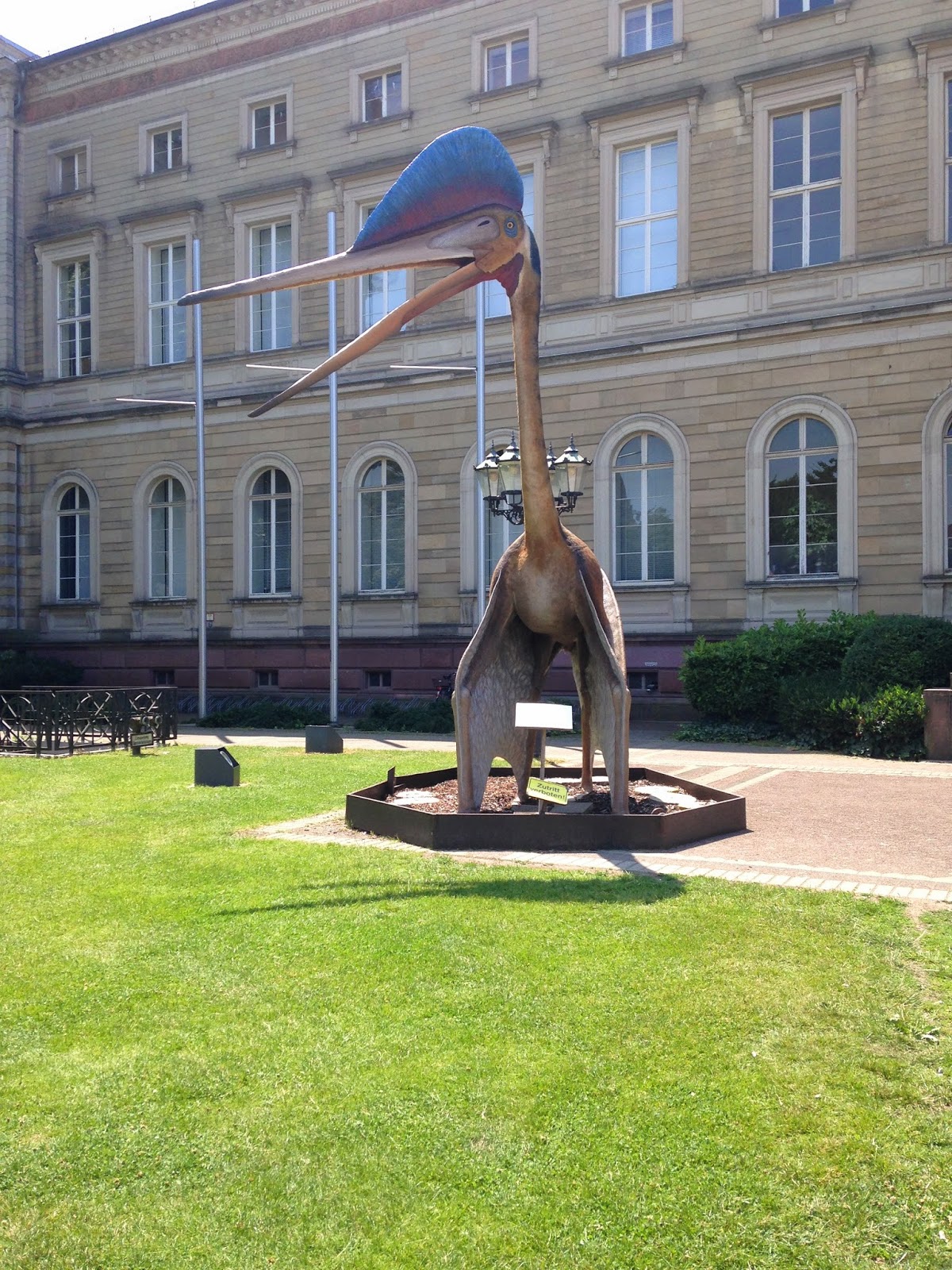 That made me sure I was in the right place! I was actually welcomed by Dino Frey, who wonderfully hosted me for 3 days while I browsed through collections. The museum in Karlsruhe is a fantastic place with great displays, including a vivarium full of fishes, amphibians, and reptiles. They're currently in the process of building a much larger one as well which will include live coral, large snakes, and more. I was lucky enough to get a quick tour through the future exhibit. I'd like to go back when it's done! They also have a great section upstairs on flying animals, including birds and pterosaurs, with many unique original fossils, like the type specimen of Ludodactylus.
The other great thing about Karlsruhe is the pterosaur replicas. You've already seen the one sitting outside, but the one I love is the full-size Quetzalcoatlus northropi replica they have hanging from the roof. Now if you know anything about pterosaurs, you know that that is a feat. This is one of, if not the biggest pterosaur known yet, with a wingspan of 11-12 m. And they have one, fleshed out, covered in pycnofibres and all, hanging from the roof. It's quite a sight from beneath where you can get a glimpse of it from another part of the museum. It is a remarkable thing... 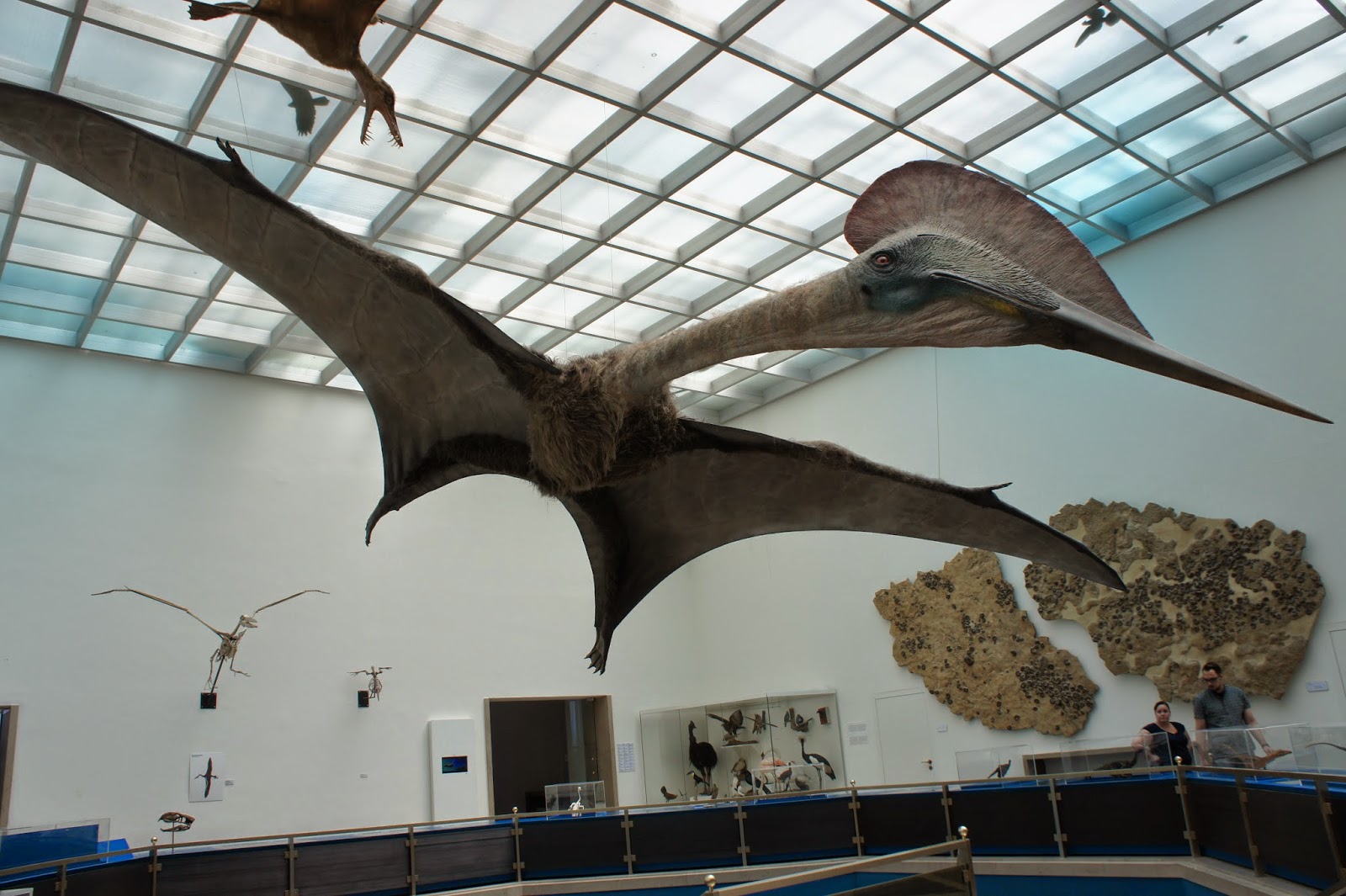 I was told that it took 3 days to install, and it came in 3 pieces. You can also see a little Rhamphorhynchus sticking out of the top left. The best thing about Karlsruhe, of course, was the fact that I got to borrow a bunch of specimens to CT scan back in Southampton. I am so happy for this opportunity and looking forward to what I'll find!

This weekend, I'm off to North America, starting with LA. Let the jet-setting continue!
Posted by gimpasaura at 18:06